I'm working away today, so no design project to report on until tomorrow. This means my dog Bertha is bored because I'm sitting at the computer all day. This is what happens when she's bored... 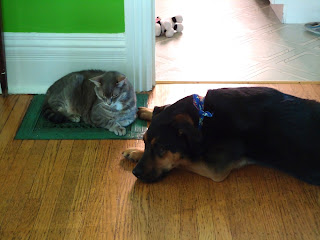 She sits as close as she can to Atticus (notice he's sitting right on top of the heating vent? genius!), and then starts nibbling his toes and licking his head until he can't take it any more and runs away. Poor guy! But damn is it funny!

So despite the weather, we had quite an eventful weekend! My cousin Christina was participating in an artist talk at the ROM in Toronto, as her photographs are part of an exhibit that has been there since October. (If you get a chance, you've GOT to go see this - it's incredible!) The exhibit is called Position as Desired - cureated by Wedge Curatorial Proects - you can check out a press release from the ROM about it here.

So later that evening we went to Joe Mamma's on King St. Not a bad spot, and had room for the huge party of people we arrived with. And then the music started. Holy moly it was awesome!!! Not sure what the name of the house band was, but they were seriously great! What a great dose of live music!
Posted by Kathy at 6:42 AM

Newer Post Older Post Home
Subscribe to: Post Comments (Atom)
I'm Kathy and I've started this blog to share with you all kinds of things I love, thoughts I have and projects I'm doing with Relish and around my house in Hamilton, Ontario. And whatever else I feel the urge to share.

Like keeping you up to date with the latest happenings with my online business Relish.

Or telling you about my online shop Relish Vintage on Etsy.

I hope you enjoy and maybe even get inspired by some of the things you see here.